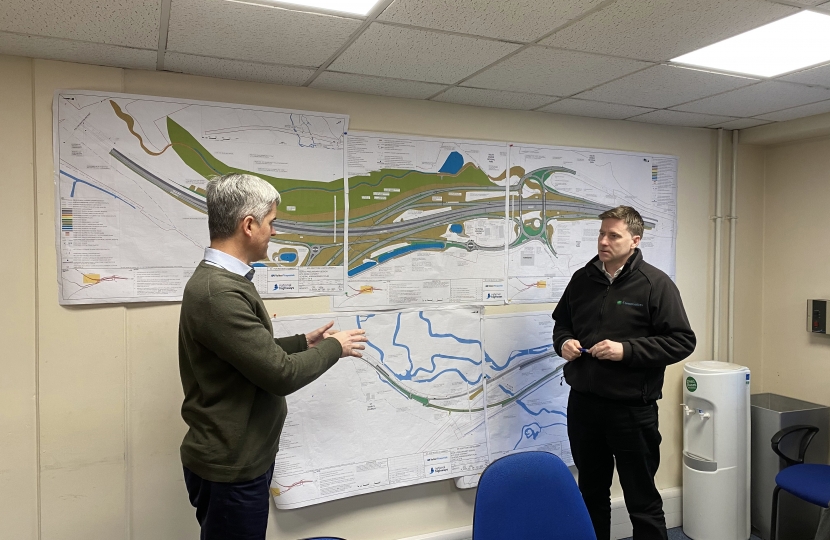 Winchester and Chandler’s Ford MP, Steve Brine, has welcomed news that the M3 Junction 9 Improvement plan is still on its original timeline, first confirmed in Summer 2021.

During a meeting with the team behind the project, at National Highways Easton Lane depot, Steve received a detailed briefing as the project moved out of its consultation phase and into the final preparations for their planning application to the Planning Inspectorate expected this Spring.

The improvement plan’s aim is to ensure “free movement from the A34 and the M3” and has received backing from across the south and even as far as the Black Country, with the A34 being a vital logistical route to the Midlands and beyond.

Speaking after the meeting Steve said; “I really appreciated the update from the team at National Highways. I know they’re working flat out to get this project off the drawing board and was incredibly glad to hear the plan is still on track as well as the many changes they’ve made to fully integrate walking and cycling around the new layout as well as to accommodate legitimate concerns constituents had around access off the new junction towards Kings Worthy.

“I’m glad to have also caught up with the smart motorways team following the Secretary of State for Transport’s response to the recent select committee report. We need to be careful to ensure the pause in that project doesn’t get in the way of progress on J9 and am seeking a meeting with the Roads Minister, Baroness Vere, to work through that.”

The MP also heard about plans being worked on by the agency to meet new biodiversity aims agreed in the recently passed Environment Act.

The improvement plan is due to be sent to the planning inspector in April of this year, with construction hallmarked for early 2024 and completion by December 2026.

Steve Brine also raised the nearby 'Cart & Horses' junction at Kings Worthy during the meeting and pressed NH to redouble efforts with Hampshire County Council to make sure they don't miss the opportunity to look afresh at what he called a "lethal junction" when these works get underway. The MP has consistently called for a fundamental road layout change at the Cart & Horses.