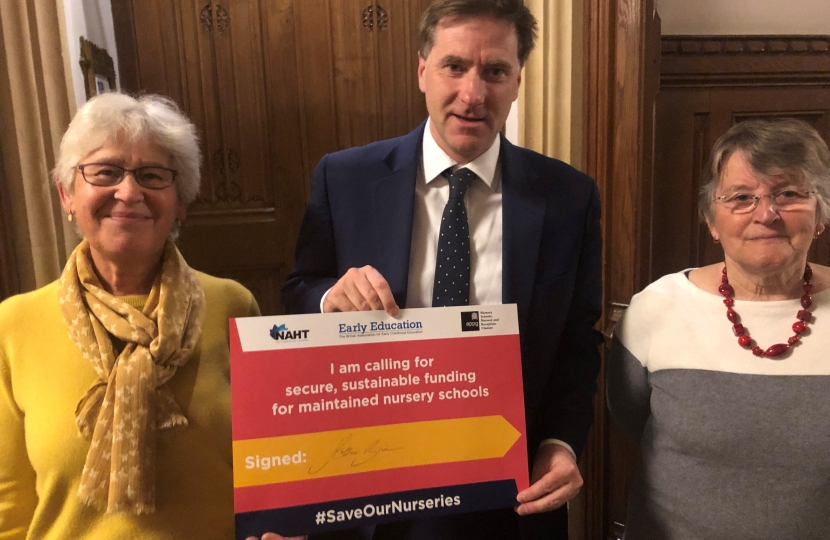 Steve Brine met up with representatives from Lanterns in Parliament on Monday 11th March.

The Winchester MP has been supporting the Bereweeke nursery as they backed a campaign aimed at securing future funding for maintained nursery schools.

Hundreds of Headteachers and Governors were there to lobby their MPs. Kathy East and Chrissie Harte, Governors from Lanterns, said they were so pleased to meet with Steve Brine, who has been “so supportive” of the campaign.

Kathy East said: “Following the lobby there was a march to Downing Street to hand in a letter to Philip Hammond asking for funding to be secured at spending review in the summer as the current funding will run out in October 2020. Lanterns provides fantastic early years education and in Winchester in particular to children with special needs.

Steve Brine said: “This is such an important campaign, and I have heard from many Lanterns parents who have been in touch with me. It was great to meet with Kathy and Chrissie, and I was pleased that the Nurseries Minister, Nadhim Zahawi, announced that the government would extend the supplementary funding paid to local authorities - by a sum of approximately £24 million - to enable them to fully-fund maintained nursery schools for the whole of the 2019/20 academic year.

“He is very aware that there have been growing concerns amongst local authorities and others about the need to allocate places for this September without knowing what will happen in the 2020 summer term, and this commitment gives the assurance needed to allocate places with confidence.

“While this is welcome, we know that this further funding for maintained nursery schools does not resolve the wider question over their long-term future. That will be resolved during the next Spending Review, and I will continue to make the case with the Chancellor.”