MP speaks on Britain’s place in the world 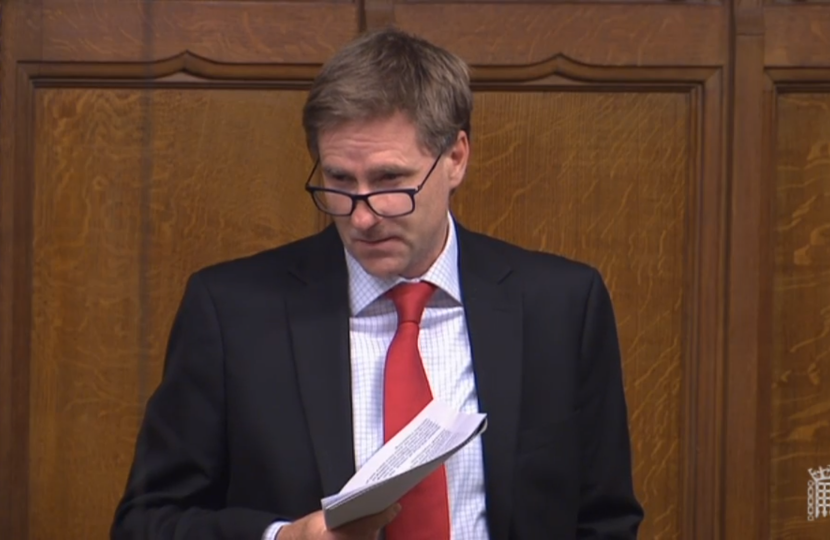 Focusing on Britain’s place in the world, he covered the progress of Brexit, and what it means for Britain’s standing and the issue of EU citizen’s rights, and also used the opportunity to welcome other measures announced by the Government in Her Majesty’s speech.

The MP told the House that the Government must deliver the result of the 2016 EU Referendum, by taking a moderate centrist path forward that protects our economy and our union.”

On the issue of EU citizen’s rights, he welcomed the new Immigration Bill, which would guarantee EU citizens currently living and working in the UK the right to remain, but he emphasised that this right must be enshrined into law as soon as possible. He said: “I am quite clear—many of my constituents will share this wish—that this is not something that we should be getting around to in late 2019 or early 2020. The previous Government—the Prime Minister said this at the time—should have legislated right away to end the uncertainty that our EU friends and neighbours living here have felt since June 2016. Many of my constituents have contacted me to express that view.”

Steve also referenced his experiences as Public Health Minister, when he regularly represented the NHS abroad, saying: “I was fortunate to represent our country at G7 and G20 meetings. The experience of travelling wearing that NHS badge was that so many countries are envious, and rightly so, of our NHS. We are probably its harshest critics here domestically. Perhaps that is how it should be, but when we talk around the world about our primary care, GP and cancer services, our screening programmes —we are the first country in the world to implement the faecal immunochemical test, or FIT, bowel cancer screening programme—and the immunisation programme we have in our country, we should remember that there are many things for which Britain is rightly looked up to.”

Steve also touched on other announcements made by the Government in the speech. He welcomed plans for an independent NHS investigations body, reforms to the justice system focussing around rehabilitaton of offenders and an increasing Government focus on the environment. He told the House: “I am delighted to see a new Environment Bill that promises to set legally binding targets to reduce plastics, cut air pollution, restore biodiversity and improve water quality. As promised, the Animal Welfare Bill to outlaw the proceeds of trophy hunting will be very welcome.”

He finished his speech with a plea to the House that the country needed to move forward on Brexit, saying “We have to move forward from where we are in life and not from where we wish to be. My view is that Britain’s place in the world is strong, and I think that it will remain so. It is changing, that is for sure, but I suspect that when my children are my age this current time will just be one part of the story that is this ongoing, successful United Kingdom.”

Pictured; Steve on his feet in the House of Commons during the debate.

Read what Steve said in Hansard

Following the vote, in a referendum held on 23rd June 2016, the UK is leaving the European Union.